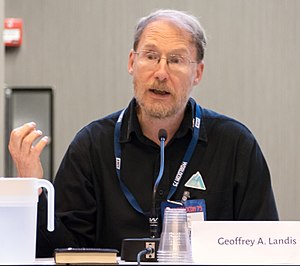 Who is Geoffrey A. Landis?

Geoffrey Alan Landis is an American scientist, working for the National Aeronautics and Space Administration on planetary exploration, interstellar propulsion, solar power and photovoltaics. He holds eight patents, primarily in the field of improvements to solar cells and photovoltaic devices and has given presentations and commentary on the possibilities for interstellar travel and construction of bases on the Moon, Mars, and Venus.

Supported by his scientific background Landis also writes hard science fiction. For these writings he has won a Nebula Award, two Hugo Awards, and a Locus Award, as well as two Rhysling Awards for his poetry. He contributes science articles to various academic publications.

Discuss this Geoffrey A. Landis biography with the community: