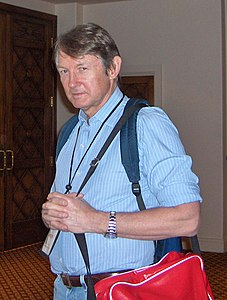 Who is George Butler?

George Butler is an English photographer and documentary filmmaker.

After meeting John Kerry in 1964 he worked with him on the book The New Soldier published in 1971.

On a photo assignment to cover the IFBB Mr. Universe contest in Baghdad in 1972, Butler met Arnold Schwarzenegger. His photographs were used to illustrate Charles Gaines' 1974 essay "Pumping Iron", on which Butler later based his first documentary feature, Pumping Iron. The film showcased Schwarzenegger and other bodybuilders that is credited with starting Schwarzenegger's film career. Butler later directed a sequel, also based on Gaines' writing, called Pumping Iron II: The Women. It featured Bev Francis, Rachel McLish, and several other women.

Butler initially worked sparingly as a documentary filmmaker making 3 films between 1977 and 1999. However, in recent years he has started to work more regularly. In 2000, he made The Endurance a 97 minute documentary about Ernest Shackleton's failed Antarctic expedition in 1914. The film was well received by critics, and was nominated for and won several awards.

Discuss this George Butler biography with the community: