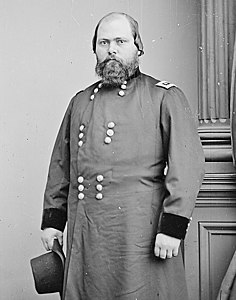 Who was George Lucas Hartsuff?

George Lucas Hartsuff was an American soldier, born at Tyre, New York. He graduated at West Point in 1852, graduating 19th out of 43 in his class. He served on the frontier and in Florida, where, during a fight with the Seminole Indians near Fort Myers, he received a wound which eventually caused his death. Hartsuff survived the wreck of the steamer Lady Elgin on Lake Michigan on September 8, 1860.

On March 22, 1861, Hartsuff was appointed assistant adjutant general with the brevet rank of captain and was assigned to duty under Rosecrans in West Virginia. He held under staff positions, eventually serving briefly as chief of staff of the Mountain Department. Hartsuff became a brigadier general on April 15, 1862. He served in third corps Army of Virginia and then in the Army of the Potomac. Hartsuff was severely wounded in the hip at Antietam while leading a brigade in second division I Corps. Immediately after the battle he was made a brevet colonel in the regular army for gallant and meritorious services.

Hartsuff was promoted to the rank of major general on November 29, 1863.

Discuss this George Lucas Hartsuff biography with the community: