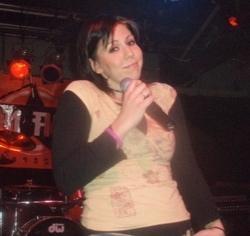 Gina Glocksen is an American singer, who was the ninth-place finisher on the sixth season of American Idol. She was eliminated on April 4, 2007. She previously appeared in season 5. Glocksen is the first among the few contestants to have been eliminated in Hollywood round in an earlier season and then place in a later one.

Discuss this Gina Glocksen biography with the community: