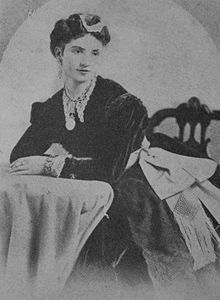 Who was Giuseppina Morlacchi?

Giuseppina Morlacchi was an Italian American ballerina and dancer, who introduced the can-can to the American stage, and married the scout and actor Texas Jack Omohundro. She was born in Milan, and attended dance school at La Scala. She debuted on the stage in 1856 at Genoa. In a short time she became a well-known dancer, touring the continent and England. In Lisbon, she met noted artist and manager John DePol, who persuaded her to go to America.

In October 1867, she made her American debut at Banvard's Museum in New York City, performing The Devil's Auction. She became an immense success, and DePol took the show to Boston. During her rise to fame DePol insured her legs for $100,000 after which newspapers claimed Moriacchi was 'more valuable than Kentucky'.

From 1867 though 1872 Giuseppina traveled the United States dancing in various venues with Morlacchi Ballet Troupe which she formed performing before various politicians, dignitaries and the Grand Duke of Russia. On January 6, 1868, the company played at the Theatre Comique and premiered a new type of dance, billed as "...Grand Gallop Can-Can, composed and danced by Mlles. Morlacchi, Blasina, Diani, Ricci, Baretta,... accompanied with cymbals and triangles by the coryphees and corps de ballet." The new dance received an enthusiastic reception.

Discuss this Giuseppina Morlacchi biography with the community: