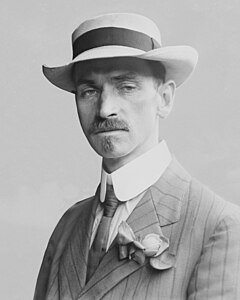 Who was Glenn Curtiss?

Glenn Hammond Curtiss was an American aviation pioneer and a founder of the U.S. aircraft industry. He began his career as a bicycle racer and builder before moving on to motorcycles. As early as 1904, he began to manufacture engines for airships. In 1908 Curtiss joined the Aerial Experiment Association, a pioneering research group, founded by Alexander Graham Bell at Beinn Bhreagh, Nova Scotia to build flying machines.

Curtiss made the first officially witnessed flight in North America, won a race at the world's first international air meet in France, and made the first long-distance flight in the United States. His contributions in designing and building aircraft led to the formation of the Curtiss Aeroplane and Motor Company, now part of Curtiss-Wright Corporation. His company built aircraft for the U.S. Army and Navy, and, during the years leading up to World War I, his experiments with seaplanes led to advances in naval aviation. Curtiss civil and military aircraft were predominant in the inter-war and World War II eras.

Discuss this Glenn Curtiss biography with the community: