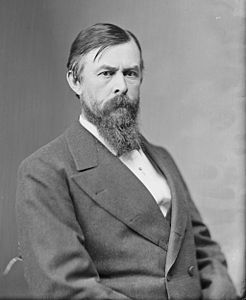 Who was Green Clay Smith?

Green Clay Smith was a United States soldier and politician. Elected to the Kentucky state house before the American Civil War, he was commissioned as a Union officer when he volunteered, advancing to the rank of major general before he resigned the next year to go to Congress. He was elected to the US Congress from Kentucky in 1862 representing the Unionist Party, serving until 1866.

That year, Smith was appointed as the Territorial Governor of Montana, serving from 1866 to 1869. He returned to Washington, DC, where he was ordained as a Baptist minister and became active in the temperance movement.

Discuss this Green Clay Smith biography with the community: