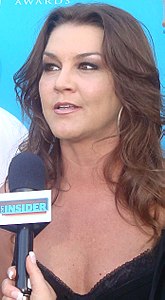 Who is Gretchen Wilson?

Gretchen Frances Wilson is an American country music artist. She made her debut in 2004 with the Grammy Award-winning single "Redneck Woman", a number-one hit on the Billboard country charts. The song served as the lead-off single of her debut album, Here for the Party. Wilson followed this album one year later with All Jacked Up, the title track of which became the highest-debuting single for a female country artist upon its 2005 release. A third album, One of the Boys, was released in 2007.

Overall, Wilson has charted 13 singles on the Billboard country charts, of which five have reached Top Ten: the Number One "Redneck Woman", as well as "Here for the Party", "When I Think About Cheatin'", "Homewrecker", and "All Jacked Up". The album Here for the Party was certified 5× Multi-Platinum by the RIAA for sales of five million copies, while All Jacked Up was certified platinum. She has sold over 8 million records worldwide.

Discuss this Gretchen Wilson biography with the community: