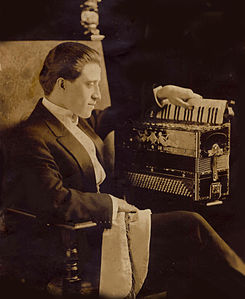 Who was Guido Deiro?

Count Guido Pietro Deiro was a famous vaudeville star, international recording artist, composer and teacher. He was the first piano-accordionist to appear on big-time vaudeville, records, radio and the screen. Guido usually performed under the stage-name "Deiro". Guido and his younger brother Pietro Deiro were among the highest paid musicians on the vaudeville circuit, and they both did much to introduce and popularize the piano accordion in the early 20th century.

Discuss this Guido Deiro biography with the community: