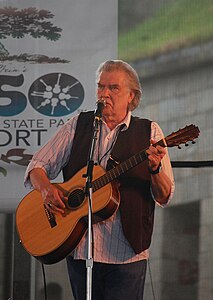 Who is Guy Clark?

Guy Charles Clark is a Grammy Award winning American Texas country and folk singer, musician, songwriter, recording artist, and performer. He has released more than twenty albums, and his songs have been recorded by other artists including Jerry Jeff Walker, Jimmy Buffett, Ricky Skaggs, Steve Wariner, and Rodney Crowell. Guy Clark won the 2014 Grammy Award for Best Folk Album: My Favorite Picture Of You.

Clark was born in Monahans, Texas and eventually settled in Nashville, where he helped create the progressive country and outlaw country genres. His songs "L.A. Freeway" and "Desperados Waiting for a Train" that helped launch his career were covered by numerous performers.

Discuss this Guy Clark biography with the community: