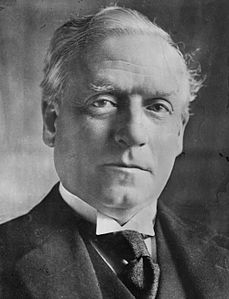 Herbert Henry Asquith, 1st Earl of Oxford and Asquith, KG, PC, KC served as the Liberal Prime Minister of the United Kingdom from 1908 to 1916. Until 5 January 1988, he had been the longest continuously serving Prime Minister in the 20th century.

As Prime Minister, he led his Liberal party to a series of domestic reforms, including social insurance and the reduction of the power of the House of Lords. He led the nation into the First World War, but a series of military and political crises led to his replacement in late 1916 by David Lloyd George. His falling out with Lloyd George played a major part in the downfall of the Liberal Party.

Before his term as Prime Minister he served as Home Secretary and as Chancellor of the Exchequer. He was known as H. H. Asquith until his elevation to the peerage, when he became Earl of Oxford and Asquith.

Asquith's achievements in peacetime have been overshadowed by his weaknesses in wartime. Many historians portray a vacillating Prime Minister, unable to present the necessary image of action and dynamism to the public. Others stress his continued high administrative ability, and argue that many of the major reforms popularly associated with Lloyd George as "the man who won the war" as actually having been implemented by Asquith. The dominant historical verdict is that there were two Asquiths: the urbane and conciliatory Asquith, who was a successful peacetime leader, and the hesitant and increasingly exhausted Asquith, who practised the politics of muddle and delay during the Great War.

Discuss this H. H. Asquith biography with the community: