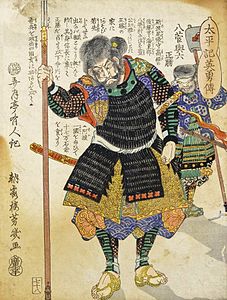 Who was Hachisuka Masakatsu?

Hachisuka Masakatsu, also Hachisuka Koroku, was a daimyo and retainer of Toyotomi Hideyoshi during the Azuchi-Momoyama period of Japanese history. He was the son of Hachisuka Masatoshi.

The Hachisuka clan were the kokujin of the Kaitō District of Owari Province. They controlled water transport on the Kiso River. Their knowledge of local terrain made them useful to the Oda and Saitō clans, although they remained independent of control of the powerful clans.

Later, Masakatsu served Toyotomi Hideyoshi, and may have participated in the building of Sunomata Castle as well as the campaigns against the Mōri. In 1585, Hideyoshi awarded him Awa Province as a fief, but he declined in favor of his son, Iemasa, serving instead as an intimate of Hideyoshi.

Discuss this Hachisuka Masakatsu biography with the community: