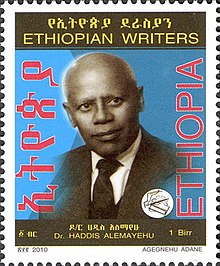 Who was Haddis Alemayehu?

He was born in the Endor Kidane Miheret section of the city of Debre Marqos, the son of an Orthodox priest, Abba Alemayehu Solomon. As a boy, he began his education within the system of the Ethiopian Orthodox Church, studying at the monasteries of Debre Elias, Debre Werq, and Dima. Later, he moved to Addis Ababa where he enrolled at the Swedish Mission and later at the Tafari Makonnen School for further education of the secular sort. He was eventually awarded an honorary doctorate by Addis Ababa University.

Discuss this Haddis Alemayehu biography with the community: