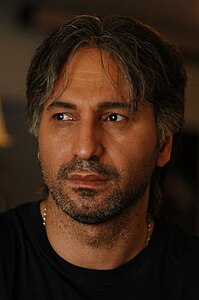 Hamid Farrokhnezhad is an Iranian actor, writer and director. He graduated from the Theatre Director program in Tehran University's Fine Arts Department. His practical thesis was based on the play "He Said Yes / He Said No" and his theoretical thesis was titled, "Theater in the East"

He won his first two Crystal Simorgh, a notable award in Iranian cinema given annually at the Fajr Film Festival, for Aroos-e Atash, in the acting in a supporting role and screenwriting categories. His second was in 2013 for acting in Esterdad.

Discuss this Hamid Farrokhnezhad biography with the community: