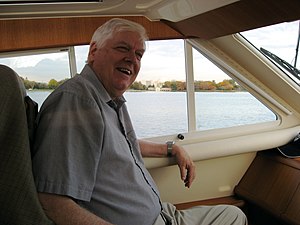 Who is Hamilton O. Smith?

Hamilton Othanel Smith is an American microbiologist and Nobel laureate.

Smith was born on August 23, 1931, and graduated from University Laboratory High School of Urbana, Illinois. He attended the University of Illinois at Urbana-Champaign, but in 1950 transferred to the University of California, Berkeley, where he earned his B.A. in Mathematics in 1952. He received his medical degree from Johns Hopkins University in 1956. In 1975, he was awarded a Guggenheim Fellowship he spent at the University of Zurich.

In 1970, Smith and Kent W. Wilcox discovered the first type II restriction enzyme, that is now called as HindII. Smith went on to discover DNA methylases that constitute the other half of the bacterial host restriction and modification systems, as hypothesized by Werner Arber of Switzerland.

He was awarded the Nobel Prize in Physiology or Medicine in 1978 for discovering type II restriction enzymes with Werner Arber and Daniel Nathans as co-recipients.

He later became a leading figure in the nascent field of genomics, when in 1995 he and a team at The Institute for Genomic Research sequenced the first bacterial genome, that of Haemophilus influenzae. H. influenza was the same organism in which Smith had discovered restriction enzymes in the late 1960s. He subsequently played a key role in the sequencing of many of the early genomes at The Institute for Genomic Research, and in the sequencing of the human genome at Celera Genomics, which he joined when it was founded in 1998.

Discuss this Hamilton O. Smith biography with the community: