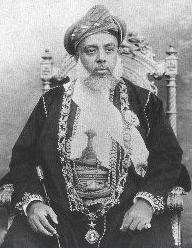 Who was Hamoud bin Mohammed of Zanzibar?

Sayyid Sir Hamoud bin Mohammed Al-Said, GCSI, was the British-controlled Omani sultan of the protectorate of Zanzibar, who outlawed slavery on the island.

Hamoud became sultan with the support of the British consul, Sir Basil Cave, upon the death of Hamad bin Thuwaini. Before he could enter the palace, another potential contender for the throne, Khalid bin Barghash, seized the palace and declared himself sultan. The British responded the next day, August 26, 1896, by issuing an ultimatum to Khalid and his entourage to evacuate the palace by 9:00 am on August 27. When he refused, British warships fired on the palace and other strategic locations in the city, destroying them and causing Khalid and his group to flee. According to the Guinness Book of World Records the resultant Anglo-Zanzibar War was the shortest war in history, and the same day Hamoud was able to assume the title of sultan, more indebted to the British than ever.

Hamoud demanded that slavery be banned in Zanzibar and that all the slaves be freed.

By his wife Princess Sayyida Khanforah bint Majid Al-Busaid he had ten children:

Discuss this Hamoud bin Mohammed of Zanzibar biography with the community: