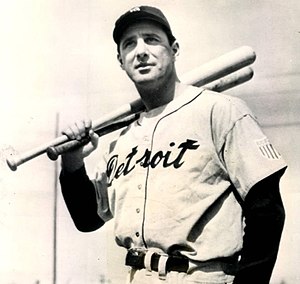 Who was Hank Greenberg?

Henry Benjamin "Hank" Greenberg, nicknamed "Hammerin' Hank," "Hankus Pankus" or "The Hebrew Hammer," was an American professional baseball player in the 1930s and 1940s. A member of the sport's Hall of Fame, he was one of the premier power hitters of his generation and is widely considered as one of the greatest sluggers in baseball history.

A first baseman primarily for the Detroit Tigers, Greenberg was a five-time All-Star and two-time American League MVP. He was the first major league player to hit 25 or more home runs in a season in each league, and remains the American League record-holder for most RBIs in a single season by a right-handed batter. He lost almost four years in the prime of his career serving in the U.S. Armed Forces in World War II.

In 1947 Greenberg signed a contract with a $30,000 raise to a record $85,000 before being sold to the Pittsburgh Pirates. He was one of the few opposing players to publicly welcome Jackie Robinson that year to the major leagues.

Discuss this Hank Greenberg biography with the community: