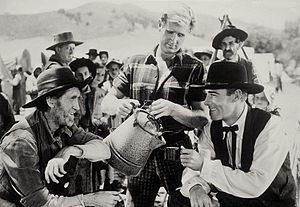 Who was Hank Patterson?

Hank Patterson was an American actor and musician. He is most known for playing stableman Hank Miller on Gunsmoke and Fred Ziffel on Petticoat Junction and Green Acres.

Patterson was born in Springville, Alabama to Green Davis Patterson and Mary Isabell "Mollie" Newton Patterson. He had intended to be a serious pianist, but became instead a vaudeville piano player, eventually moving to Hollywood where he played in a series of movies, largely Westerns and science fiction from 1939 to 1973. He also played in a number of television westerns including The Cisco Kid, The Adventures of Kit Carson, The Lone Ranger, Annie Oakley, Have Gun-Will Travel, The Rifleman and Bonanza. He was also in a couple of episodes of Cheyenne, Maverick, Lawman and Daniel Boone. He also made an appearance on Perry Mason in 1958 in "The Case of the Terrified Typist."

Discuss this Hank Patterson biography with the community: