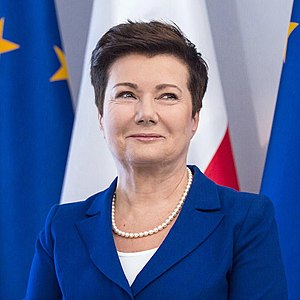 Hanna Beata Gronkiewicz-Waltz is a Polish liberal-conservative politician who has been the Mayor of Warsaw since 2 December 2006. She is the first woman to hold this position.

Between 1992 and 2000, she was the Chairman of the National Bank of Poland, the central bank of Poland. She resigned to take the position of the Deputy Chairman of European Bank for Reconstruction and Development, a position she held between 2001 and 2004.

Gronkiewicz-Waltz was elected to the Sejm on 25 September 2005 after receiving 137,280 votes in the 19th Warsaw district, running on the Civic Platform list.

In the 2006 municipal elections, Gronkiewicz-Waltz served as Civic Platform's nominee for mayor of Warsaw. On 12 November she gained 34.23%, finishing next to Law and Justice candidate, former Prime Minister Kazimierz Marcinkiewicz. As neither received 50 percent of the vote, a second round election was held on 26 November, where Gronkiewicz-Waltz received 53.18% of the votes, winning the election.

In January 2007, just a few weeks into her term, Gronkiewicz-Waltz was at the center of a controversy that could have cost her the office.

Discuss this Hanna Gronkiewicz-Waltz biography with the community: