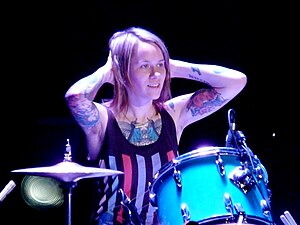 Hannah Blilie is the drummer of the American band Gossip and formerly Shoplifting. She has also performed with Sarah Dougher, Chromatics, Stiletto, Mr Yuk, The Lumpies, Vade, The Vogue, and Soiled Doves. Her twin brother, Jordan Blilie, was one of the two lead vocalists of now-defunct The Blood Brothers. A photo of Blilie is featured on the cover artwork for the Gossip's fourth studio album Music for Men.

In 2003, Blilie replaced Kathy Mendonca as the drummer of Gossip, and her drumming appears on their LP Standing In The Way Of Control. She also plays on the Gossip album Live in Liverpool.

Like her bandmate Beth Ditto, Blilie identifies as lesbian.

Discuss this Hannah Blilie biography with the community: