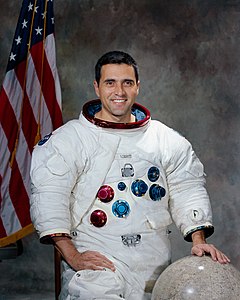 Who is Harrison Schmitt?

In December 1972, as one of the crew on board Apollo 17, Schmitt became the first member of NASA's first scientist-astronaut group to fly in space. As Apollo 17 was the last of the Apollo missions, he also became the twelfth and, as of 2014, last person to set foot on the Moon. Schmitt also remains the first and only professional scientist to have flown beyond low Earth orbit and to have visited the Moon. He was influential within the community of geologists supporting the Apollo program and, before starting his own preparations for an Apollo mission, had been one of the scientists training those Apollo astronauts chosen to visit the lunar surface.

Schmitt resigned from NASA in August 1975 in order to run for election to the United States Senate as a member from New Mexico. As the Republican candidate in the 1976 election, he defeated the two-term Democrat incumbent Joseph Montoya, but, running for re-election in 1982, was himself defeated, by Democrat Jeff Bingaman.

Discuss this Harrison Schmitt biography with the community: