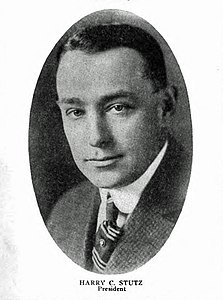 Who was Harry C. Stutz?

Harry C. Stutz was a United States automobile entrepreneur, engineer, and innovator in the automobile industry.

Stutz grew up caring for and repairing agricultural machinery on the family farm. Automobiles and engines fascinated him. Stutz built his first car in 1897, and then a second auto using a gasoline engine of his own design and manufacture. In 1905, he designed a car for the American Motor Car Company. He soon left the new company and founded the Ideal Motor Car Company, an enterprise that he later renamed Stutz Motor Company. He was also instrumental in creating the Stutz Fire Engine Company, as well as the H.C.S. Motor Car Company in 1919. In 1929 he formed the Stutz-Bellanca Airplane Company.

He is buried at Crown Hill Cemetery in Indianapolis.

Discuss this Harry C. Stutz biography with the community: