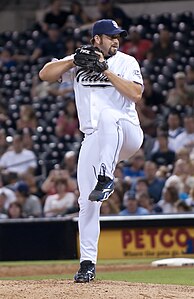 Who is Heath Bell?

Heath Justin Bell is an American professional baseball relief pitcher for the Tampa Bay Rays of Major League Baseball. He previously played for the New York Mets, San Diego Padres, Miami Marlins and Arizona Diamondbacks. While playing with the Padres, he was a three-time All-Star and twice won the Rolaids Relief Man Award. He was also awarded the DHL Delivery Man of the Year Award and The Sporting News Reliever of the Year Award.

Bell played multiple sports, including baseball, in high school. He moved on to community college, where he was an All-American. He began his professional career with the New York Mets, making his major league debut in 2004, and spending three seasons at both the minor and major league levels. In 2007, he was traded to San Diego, where he was a setup pitcher before replacing Trevor Hoffman as the Padres' closer. From 2010–2011, Bell successfully converted 41 straight save opportunities, tied for the sixth longest streak in MLB history. A free agent after the 2011 season, he signed with Miami. The Marlins traded him after one season to Arizona.

Discuss this Heath Bell biography with the community: