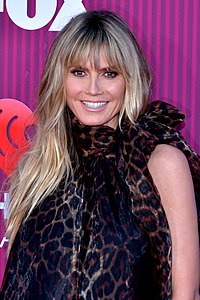 Who is Heidi Klum?

Klum became internationally known for her appearances on the cover of the Sports Illustrated Swimsuit Issue. In 1997 she became the first German model to become a Victoria's Secret Angel. Following a successful modeling career, Klum garnered acclaim as the host and judge of the reality show Project Runway which earned her an Emmy nomination in 2008 and a win in 2013 for Outstanding Host for a Reality or Reality-Competition Program. She has worked as a spokesmodel for Dannon and H & M, and has appeared in numerous commercials for McDonald's, Volkswagen and others. In 2009, Klum became Barbie's official ambassador on Barbie's 50th anniversary. As an occasional actress, she had supporting roles in movies including Blow Dry, Ella Enchanted, and made cameo appearances on The Devil Wears Prada and Perfect Stranger. She has also appeared on TV shows including Sex and the City and How I Met Your Mother. Currently, Klum is a judge on the NBC reality show America's Got Talent.

Discuss this Heidi Klum biography with the community: