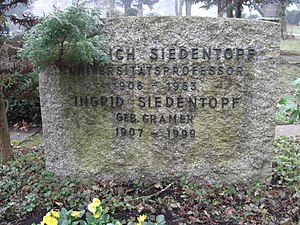 Heinrich Friedrich Siedentopf was a German astronomer and physicist.

Professor Siedentopf published a total of 146 papers and a textbook. He studied cosmology, stellar convection, photometry and the Zodiacal light. In 1934 he developed an adjustable iris for the Stetson-Schilt photometer, allowing the observer to adjust the light level directed at the astronomical plate.

Siedentopf crater on the Moon and the main belt asteroid 5375 Siedentopf were named after him.

Discuss this Heinrich Siedentopf biography with the community: