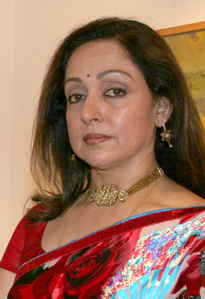 Who is Hema Malini?

Hema Malini is an Indian actress, director and producer, Bharatanatyam dancer-choreographer, and a politician, well known for the roles in Hindi cinema. Making her acting debut in Sapno Ka Saudagar, she went on to appear in numerous Bollywood films, most notably those with actor and future-husband Dharmendra and with Rajesh Khanna. Malini was initially promoted as "Dream Girl", and in 1977 starred in a film of the same name. During this period, she established herself as one of Hindi cinema's leading actresses, noted for both her comic and dramatic roles, her beauty, and her accomplished classical dancing.

Malini is one of the most successful female film stars in the history of Indian cinema. Appearing in over 150 films in a career span of 40 years, she has starred in a large number of successful films, and her performances in both commercial and arthouse cinema, were often recognised. During her career, she has been nominated 11 times for the Filmfare Award for Best Actress, of which she won once in 1972. In 2000, she was presented with the Filmfare Lifetime Achievement Award.

Discuss this Hema Malini biography with the community: