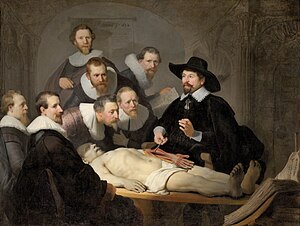 Who was Hendrick van Uylenburgh?

Van Uylenburgh came from a Frisian family and emigrated with this family to Kraków when he was a boy. He was trained as a painter and also worked as an art buyer for the Polish king. Around 1612 he moved to Danzig and in 1625 returned to the Netherlands, settling in the bustling capital of Amsterdam.

His son Gerrit van Uylenburgh took over the family business after Van Uylenburgh's death and burial in the Westerkerk church in 1661. Gerrit went bankrupt in 1675 following accusations that he had sold forged art to Frederick William, Elector of Brandenburg.

Discuss this Hendrick van Uylenburgh biography with the community: