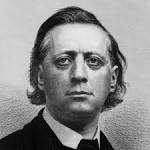 Who was Henry Ward Beecher?

Henry Ward Beecher was an American Congregationalist clergyman, social reformer, and speaker, known for his support of the abolition of slavery, his emphasis on God's love, and his 1875 adultery trial.

Henry Ward Beecher was the son of Lyman Beecher, a Calvinist minister who became one of the best-known evangelists of his age. Several of his brothers and sisters became well-known educators and activists, most notably Harriet Beecher Stowe, who achieved worldwide fame with her abolitionist novel Uncle Tom's Cabin. Henry Ward Beecher graduated from Amherst College in 1834 and Lane Theological Seminary in 1837 before serving as a minister in Lawrenceburg, Indiana and Indianapolis, Indiana.

In 1847, Beecher became the first pastor of the Plymouth Church in Brooklyn, New York. He soon acquired fame on the lecture circuit for his novel oratorical style, in which he employed humor, dialect, and slang. Over the course of his ministry, Beecher developed a theology emphasizing God's love above all else, a contradiction of his father's stern Calvinism. He also grew interested in social reform, particularly the abolitionist movement. In the years leading up to the Civil War, he raised money to purchase slaves from captivity and to send rifles—nicknamed "Beecher's Bibles"—to abolitionists fighting in Kansas and Nebraska. He toured Europe during the Civil War speaking in support of the Union.

Discuss this Henry Ward Beecher biography with the community: