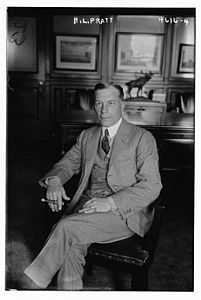 Who was Herbert L. Pratt?

Herbert Lee Pratt was an American businessman and a leading figure in the United States oil industry; from 1923 he was head of Standard Oil - his father Charles Pratt was a founder of Astral Oil Works which later became part of Standard Oil. He lived and worked in New York City, as well as having a country estate, The Braes, in Glen Cove, Long Island, and a hunting preserve and estate, Good Hope Plantation in Ridgeland, South Carolina. He was an art collector and philanthropist.

Discuss this Herbert L. Pratt biography with the community: