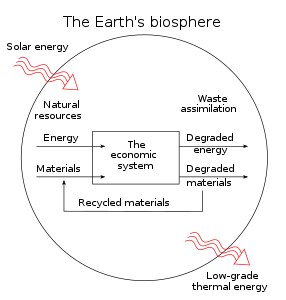 Who is Herman Daly?

Herman Edward Daly is an American ecological economist and professor at the School of Public Policy of University of Maryland, College Park in the United States. Daly was Senior Economist in the Environment Department of the World Bank, where he helped to develop policy guidelines related to sustainable development. While there, he was engaged in environmental operations work in Latin America. He is closely associated with theories of a Steady state economy. Before joining the World Bank, Daly was a Research Associate at Yale University, and Alumni Professor of Economics at Louisiana State University. He was a co-founder and associate editor of the journal, Ecological Economics.

Daly is a recipient of an Honorary Right Livelihood Award, the Heineken Prize for Environmental Science from the Royal Netherlands Academy of Arts and Sciences, the 1992 University of Louisville Grawemeyer Award for Ideas Improving World Order, the Sophie Prize, the Leontief Prize from the Global Development and Environment Institute and was chosen as Man of the Year 2008 by Adbusters magazine.

Discuss this Herman Daly biography with the community: