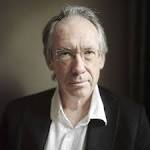 Who is Ian McEwan?

Ian Russell McEwan, CBE, FRSA, FRSL is an English novelist and screenwriter. In 2008, The Times featured him on their list of "The 50 greatest British writers since 1945".

McEwan began his career writing sparse, Gothic short stories. The Cement Garden and The Comfort of Strangers were his first two novels, and earned him the nickname "Ian Macabre". These were followed by three novels of some success in the 1980s and early 1990s. In 1997, he published Enduring Love, which was made into a film. He won the Man Booker Prize with Amsterdam. In 2001, he published Atonement, which was made into an Oscar-winning film. This was followed by Saturday, On Chesil Beach, Solar, and Sweet Tooth. In 2011, he was awarded the Jerusalem Prize.

Discuss this Ian McEwan biography with the community: