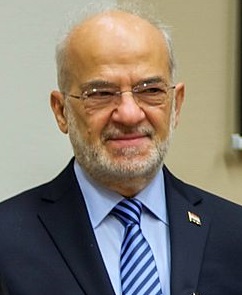 Who is Ibrahim al-Jaafari?

Ibrahim al-Eshaiker al-Jafari is an Iraqi politician who was Prime Minister of Iraq in the Iraqi Transitional Government from 2005 to 2006, following the January 2005 election. He was previously one of the two Vice Presidents of Iraq under the Iraqi Interim Government from 2004 to 2005, and he was the main spokesman for the Islamic Dawa Party. He withdrew his nomination for premiership for the permanent government because he disagreed with some of the Kurdish leaders with regards to securing Kirkuk as part of Iraq. Some members of his own group, the United Iraqi Alliance, conspired with some of the Kurdish personalities and some of the sectarian Sunni politicians and in turn these groups involved the US President George W. Bush and the British Prime Minister Tony Blair to convince al-Jafari to withdraw his nomination. Al-Jafari refused any foreign interference in the Iraqi politics and instead gave the United Iraqi Alliance the choice to decide whom they wanted, be it him or another political figure as Prime Minister. Al-Jafari refused to use force against any political group in society.

Discuss this Ibrahim al-Jaafari biography with the community: