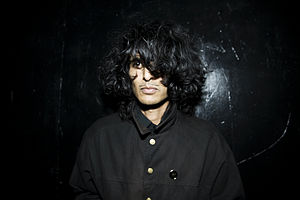 Who is Imaad Wasif?

Imaad Wasif is a singer, guitarist and songwriter whose music combines elements of psychedelic folk and rock. Wasif’s music has been described as “unbelievably intense with sparkling, raga-influenced guitar and a mystic bent.”

Wasif was born in Vancouver, British Columbia, but was raised in Palm Desert in Southern California. He began playing music as a teenager and formed his first band lowercase; “a guitar-drums duo that played a weird hybrid of minimal lo-fi pop, post-rock and slo-core.” They were signed to the seminal noise rock label Amphetamine Reptile. In 2001, he formed the psychedelic folk-rock group alaska! in addition to briefly joining Lou Barlow’s New Folk Implosion.

In 2006, he started releasing solo albums. Also during 2006–2007, Wasif played with Yeah Yeah Yeahs for the Show Your Bones world tour playing acoustic guitar, bass and synths. He performed as the supporting act for most shows. Wasif wrote songs with Karen O for the soundtrack to Where the Wild Things Are, most notably the Oscar nominated song, “Hideaway.”

Discuss this Imaad Wasif biography with the community: