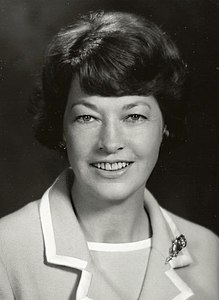 Who is Inez Trueman?

Inez Geneva Trueman was a politician in Manitoba, Canada. She served as a Progressive Conservative member of the Manitoba legislature from 1969 to 1973, and later ran for the Canadian House of Commons. She was only the fifth woman ever to serve in the assembly.

Trueman was educated at the Kahler School of Nursing in Rochester, Minnesota, and worked as a registered nurse. She married Kenneth Trueman. She was the President of the Junior League of Winnipeg from 1951-52. Trueman served as a city councillor in Winnipeg from 1968 to 1969.

She was elected to the Manitoba legislature in the provincial election of 1969, defeating New Democrat Una Decter by 304 votes in the Winnipeg riding of Fort Rouge. The NDP won this election, and Trueman sat in the opposition benches. In 1971, she was one of only two opposition MLAs to support the NDP government in amalgamating the city of Winnipeg.

In the 1973 election, she was defeated by Liberal candidate Lloyd Axworthy.

Trueman did not seek re-election to the provincial legislature after this, but ran for the federal Progressive Conservative Party in the national election of 1980. She was again defeated by Lloyd Axworthy, at that time a candidate of the federal Liberals.

Discuss this Inez Trueman biography with the community: