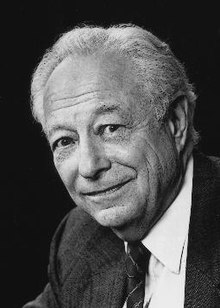 Who was Irving Kristol?

Irving Kristol was an American columnist, journalist, and writer who was dubbed the "godfather of neo-conservatism." As the founder, editor, and contributor to various magazines, he played an influential role in the intellectual and political culture of the last half-century; after his death he was described by The Daily Telegraph as being "perhaps the most consequential public intellectual of the latter half of the 20th century."

Discuss this Irving Kristol biography with the community: