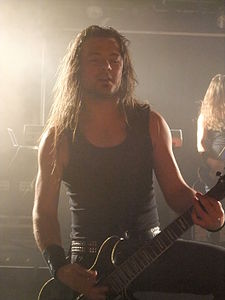 Who is Isaac Delahaye?

Isaac Delahaye is the lead guitarist for symphonic metal band Epica. Prior to that he was lead guitarist in the Dutch death metal band God Dethroned. Delahaye replaced former guitarist Jens Van Der Valk in God Dethroned after Van Der Valk left in 2004. He joined the band after a request from drummer and longtime friend Ariën van Weesenbeek, and after several meetings with Van Weesenbeek and Henri Sattler, Delahaye was welcomed into the band on 29 June 2004. On 15 January 2009, the official announcement came that Isaac was no longer a part of God Dethroned. Soon afterwards, an announcement came from the band Epica that proclaimed Delahaye as their recently hired guitarist.

Delahaye incorporates legato, alternate picking, tremolo picking, tapping, and use of the whammy bar in his solos. Delahaye once used exclusively Jackson Guitars, his primary ones being a green Jackson Kelly and a black Jackson Kelly that have Seymour Duncan pickups with a Floyd Rose tremolo. More recently he has been using Ibanez Guitars, primarily the black DN500K Darkstone, which he describes as an "Integral part of the sound of Epica". He uses Madison and Bogner amplifiers.

Discuss this Isaac Delahaye biography with the community: