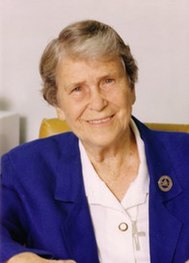 Who was Isolina Ferré?

Isolina Ferré Aguayo was a Puerto Rican-born Roman Catholic nun. Known as the "Mother Teresa of Puerto Rico", she received the Presidential Medal of Freedom in recognition of her humanitarian work.

Ferré Aguayo was born in Ponce to a wealthy family. She was one of five siblings, Jose, Carlos, Hernan, Rosario and Luis, Puerto Rico's former governor. When she was 21, Ferré traveled to the United States where she commenced her novitiate. After five years, she completed the solemn vows. As part of her religious work, Ferré traveled back and forth between Puerto Rico and the United States, serving as an abbess in Cabo Rojo and New York City.

During this time frame, she attended various universities in the United States, studying sociology and arts. After working as a member of New York City's Committee Against Poverty, to which she was appointed by Mayor John Lindsay, Ferré decided in 1969, to set her permanent residence in Ponce, specifically in the poor sector of La Playa. Here, she was responsible for opening a small hospital and a school named Centro De Orientacion De La Playa in the area, which would later become Centros Sor Isolina Ferré. She is a member of Mu Alpha Phi sorority.

Discuss this Isolina Ferré biography with the community: