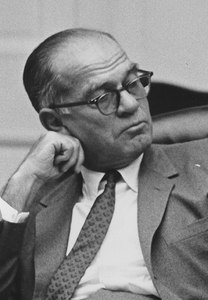 Who was J. William Fulbright?

James William Fulbright was a United States Senator representing Arkansas from 1945 to 1975.

Fulbright was a Southern Democrat and a staunch multilateralist who supported the creation of the United Nations and the longest serving chairman in the history of the Senate Foreign Relations Committee. He was also a segregationist who signed the Southern Manifesto. Fulbright opposed McCarthyism and the House Un-American Activities Committee and later became known for his opposition to American involvement in the Vietnam War. His efforts to establish an international exchange program eventually resulted in the creation of a fellowship program which bears his name, the Fulbright Program.

President Bill Clinton cited him as a mentor.

Discuss this J. William Fulbright biography with the community: