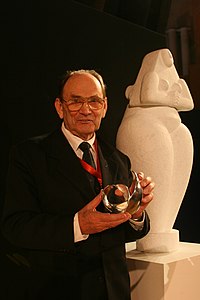 Who is Jaan Einasto?

Jaan Einasto is an eminent Estonian astrophysicist and one of the discoverers of the large-scale structure of the Universe.

Born in Tartu, he attended the University of Tartu, where he received the Ph.D. equivalent in 1955 and a senior research doctorate in 1972. From 1952, he has worked as a scientist at the Tartu Observatory Head of the Department of Cosmology; in 1992-1995, he was Professor of Cosmology at the University of Tartu. For a long time, he was Head of the Division of Astronomy and Physics of the Estonian Academy of Sciences in Tallinn. Einasto is a member of the Academia Europaea, the European Astronomical Society and the Royal Astronomical Society; he has received three Estonian National Science Awards.

⁕1955 Cand.Sc. in physics and mathematics

⁕1972 D.Sc. in physics and mathematics

⁕1994 Member of the Royal British Society of Astronomy

Discuss this Jaan Einasto biography with the community: