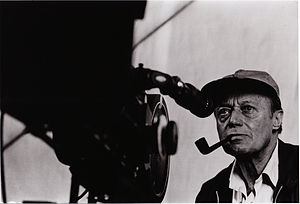 Who was Jack Cardiff?

His career spanned the development of cinema, from silent film, through early experiments in Technicolor to filmmaking in the 21st century. He was best known for his influential colour cinematography for directors such as Powell and Pressburger, Huston and Hitchcock.

Jack Cardiff's work is reviewed in detail in the documentary film: Cameraman: The Life and Work of Jack Cardiff.

Discuss this Jack Cardiff biography with the community: