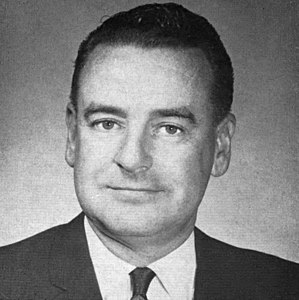 Who was Jack M. Campbell?

Campbell was born in Hutchinson, Reno County, Kansas, and educated at Washburn University, where he received an undergraduate degree in 1938 and an LL.B degree in 1940.

During World War II, Campbell served in the United States Marine Corps, moving on afterward to a legal career in Albuquerque, New Mexico, while at the same time, working as an agent for the Federal Bureau of Investigation.

In 1955, Campbell began his career in politics when he was elected to the New Mexico House of Representatives, where he served until 1962, after having spent the last two years as Speaker.

Discuss this Jack M. Campbell biography with the community: