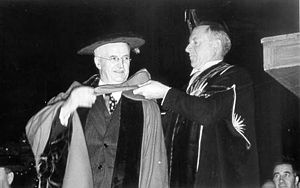 Who was Jack Mackenzie?

He was born in St. Stephen, New Brunswick, the youngest of six children of James and Janet MacKenzie. He attended Milltown High School, then completed a Bachelor of Engineering at Dalhousie University in 1909.

In 1949 he sat on the Royal Commission on National Development in the Arts, Letters and Sciences, the so-called "Massey Commission", one objective of which was developing Canada's system of publicly funded research.

Discuss this Jack Mackenzie biography with the community: