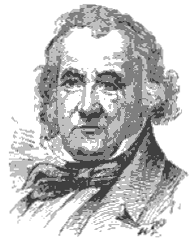 Who was Jacob Barker?

Jacob Barker was an American financier and lawyer.

He was born in Swan Island, Maine, in 1779, of Quaker parentage. He went to New York at the age of 16, engaged in trade, and soon amassed a considerable fortune. Beginning in 1811, Fitz-Greene Halleck was employed by him for twenty years. Early in the War of 1812 he was instrumental in securing a loan of $5,000,000 for the national government. In 1815, he founded the Exchange Bank of New York. He was a member of the New York State Senate in 1816. Subsequently he became interested in many other large financial institutions in the city, including the Life and Fire Insurance Company, on the failure of which in 1826 he, with a number of others, was arrested on a charge of conspiracy to defraud. At first he acted as his own lawyer, however, eventually eminent attorneys Benjamin F. Butler and Thomas Addis Emmet were counsels for his defense. The jury disagreed on the first trial and convicted Barker on the second trial; but an appeal was granted and the indictment was finally quashed.

He removed to New Orleans in 1834, became prominent in financial circles, was admitted to the bar, and practiced with success in insurance cases.

Discuss this Jacob Barker biography with the community: