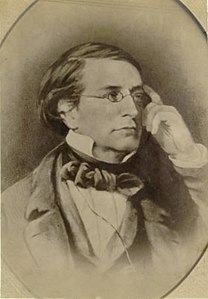 Who was Jacob Whitman Bailey?

Jacob Whitman Bailey was an American naturalist, known as the pioneer in microscopic research in America. He was born in Auburn, Mass., and in 1832 graduated at West Point, where, after 1834, he was successively assistant professor, acting professor, and professor of chemistry, mineralogy, and geology. He devised various improvements in the construction of the microscope and made an extensive collection of microscopic objects and of algæ, which he left to the Boston Society of Natural History. In 1857 he was president of the American Association for the Advancement of Science, as well as a member of the National Institute for the Promotion of Science, a precursor to the Smithsonian Institution. He was elected an Associate Fellow of the American Academy of Arts and Sciences in 1845. He died on February 26, 1857, at the beginning of his term of office as Association for Advancement of Science President.

He wrote many articles on scientific subjects for the American Journal of Science and for scientific societies, a report on the infusorial fossils of California, and a valuable volume of Microscopical Sketches, containing 3000 original figures.

Discuss this Jacob Whitman Bailey biography with the community: