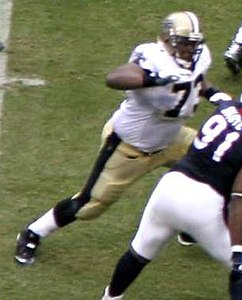 Who is Jahri Evans?

Jahri Evans is an American football offensive guard, who currently plays for the New Orleans Saints of the National Football League. He played college football for Bloomsburg University of Pennsylvania. Although only a fourth round draft pick from a small school, Evans established a reputation as one of the best guards in the NFL, and in May 2010 the Saints signed him to a seven-year, $56.7 million contract that reportedly made him the highest paid guard in NFL history.

Discuss this Jahri Evans biography with the community: