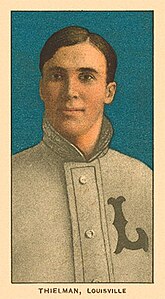 Who was Jake Thielman?

John Peter Thielman was a pitcher in Major League Baseball who played from 1905 through 1908 for the St. Louis Cardinals, Cleveland Naps and Boston Red Sox. Listed at 5 ft 11 in, 175 lb., Thielman batted and threw right-handed. He was born in St. Cloud, Minnesota. His younger brother, Henry Thielman, also pitched in the majors.

Thielman died at the age of 48 in Minneapolis, Minnesota.

Discuss this Jake Thielman biography with the community: