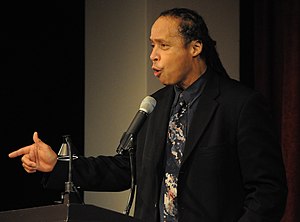 Who is Jamal Joseph?

Jamal Joseph is a U.S. writer, director, producer, poet, activist, and educator. One of the Panther 21, while incarcerated for his active participation in the Black Panther Party Joseph earned two college degrees and wrote five plays and two volumes of poetry. He is a full professor and former chair of Columbia University’s Graduate Film Division and the artistic director of the New Heritage Theater in Harlem. He has been featured on HBO's Def Poetry Jam, BET's American Gangster and on Tupac Shakur's "The Rose That Grew From Concrete" Volumes 1 & 2. He is the author of the interactive biography on Tupac Shakur, Tupac Shakur Legacy.

Joseph was nominated for a 2008 Academy Award in the Best Song category for his contributions to the song "Raise It Up", performed by IMPACT Repertory Theatre and Jamia Nash in the 2007 film August Rush.

His memoir Panther Baby was published in February 2012 by Algonquin Books.

Discuss this Jamal Joseph biography with the community: