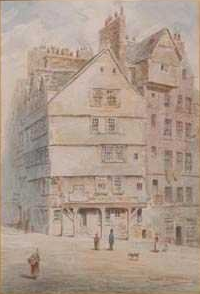 Who was James Baynes?

James Baynes was an English watercolour painter and drawing-master.

Little is known of his family apart from the fact that he was born in Lancaster as the son of a local tradesman and was the eldest of six children, his grandfather being a Catholic priest in Kirkby Lonsdale where his father was born. As a boy he showed a love of the arts and had been employed to draw heads and work devices until Dr. Campbell, a local Physician, having seen some of these works sent some sketches to his friend George Romney. The young Baynes was then sent to London to study under Romney at the expense of Dr. Campbell.

In 1784, at the age of 18 he became a student at the Royal Academy. He wedded Mary Mann in 1785 at Marylebone Church, London. Their son, Thomas Mann Baynes, was also a noted watercolour artist.

The marriage was without the consent of Campbell his patron and this resulted in a loss of support for Baynes and the withdrawal of the opportunity for an Italian tour. Thrown on his own resources he obtained employment from the Polygraphic Society, a Woolwich based company formed for the reproduction of pictures.

Discuss this James Baynes biography with the community: