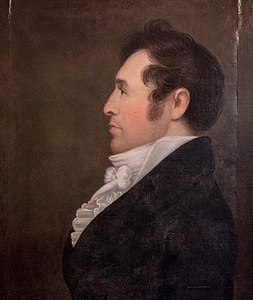 Who was James Brown Mason?

James Brown Mason was a U.S. Representative from Rhode Island.

Born in Thompson, Connecticut, in January 1775, Mason pursued classical studies. He was graduated from Brown University, Providence, Rhode Island, in 1791. He studied medicine and was admitted to practice. He moved to Charleston, South Carolina, and practiced 1795–1798. He returned to Providence, Rhode Island, and engaged in mercantile pursuits 1798–1819. He served as member of the State house of representatives 1804–1814 and served as speaker from February 1812 to May 1814.

Mason was elected as a Federalist to the Fourteenth and Fifteenth Congresses. He was not a candidate for renomination in 1818 to the Sixteenth Congress. He served as a trustee of Brown University 1804-1819. He died in Providence, Rhode Island, August 31, 1819. He was interred in North Burial Ground.

Discuss this James Brown Mason biography with the community: