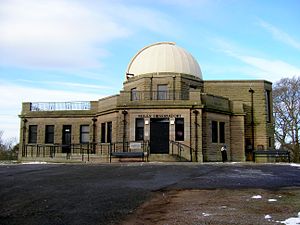 Who is James MacLellan Brown?

Brown was the assistant to the City Architect, James Thomson, who had originally planned an immense Beaux-Arts style Civic Centre covering the centre of Dundee. When the First World War intervened, his plans were scaled down and he retired in 1924. Thomson's ideas for extending City Square were developed again in 1924, when the École des Beaux-Arts-trained Burnet was commissioned to produce designs for the east and west wings to City Square. Thomson died in 1927, and James MacLellan Brown, as Depute City Architect, remodelled Burnet's designs in 1931 and produced the scheme that was built. Later Brown collaborated with Professor Ralph Allen Sampson, Astronomer Royal for Scotland, in designing Mills Observatory, a much more modern building than the one originally planned before the war.

Discuss this James MacLellan Brown biography with the community: